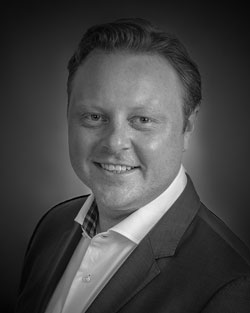 Mr. Elerud began working with Track Group in 2014 and oversees global operations management; including supply chain, manufacturing and overall cost optimization endeavors. Mr. Elerud has successfully lead re-shoring of all manufacturing to the United States from Asia after spending two years at Track Group’s research and development office in Canada, where he served as Head of Engineering. Under his leadership the company has seen multiple successful cost reductions initiatives, digitization of key operations and restructurings of Track Group’s operations with the implementation of tracking metrics and KPIs for the organization. In 2015 he designed and oversaw the outsourcing of Track Group’s hardware repair, refurbish and order fulfillment operations and spent six months in Chile advising the company’s fastest growing subsidiary on operational efficiency. Mr. Elerud has previous experience with several outsourcing endeavors of logistical operations and system integrations. He is a Swedish citizen and holds a M.Sc. in Industrial Engineering and Management from the Royal Institute of Technology in Stockholm, Sweden, and he independently spent a year studying finance and management at University of California, Berkeley.